Saoirse Úna Ronan (/ˈsɜrʃə ˈuːnæ ˈroʊnən/; born 12 April 1994) is an Irish actress. She came to international prominence in 2007 after co-starring in the film Atonement with James McAvoy and Keira Knightley, making her one of the youngest actresses ever to receive nominations for the Academy Award, BAFTA and the Golden Globe Award.For her starring role in Peter Jackson's The Lovely Bones (2009) Ronan was awarded a Critics' Choice Award, a Saturn Award, and a second BAFTA Award nomination for Best Actress.Ronan has also acted in the romantic comedy I Could Never Be Your Woman (2007), City of Ember (the film adaptation of the science fantasy young adult novel The City of Ember) (2008), the supernatural romance Death Defying Acts (2008), the war drama film The Way Back (2010), and starred in the action thriller Hanna (2011). 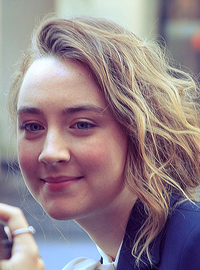 image credit
Saoirse Ronan by https://www.flickr.com/photos/gdcgraphics/, is licensed under cc-by-sa-2.0, resized from the original.