Samuel Benjamin "Sam" Harris (born April 9, 1967) is an American author, neuroscientist and philosopher. Harris is the co-founder and chief executive of Project Reason, a non-profit organization that promotes science and secularism, and host of the podcast: Waking Up with Sam Harris. As an author, he wrote the book The End of Faith, which was published in 2004 and appeared on The New York Times Best Seller list for 33 weeks. The book also won the PEN/Martha Albrand Award for First Nonfiction in 2005. In 2006, Harris published the book Letter to a Christian Nation as a response to criticism of The End of Faith. This work was followed by The Moral Landscape, published in 2010, in which Harris argues that science can help answer moral problems and can aid the facilitation of human well-being. He subsequently published a long-form essay Lying in 2011, the short book Free Will in 2012, Waking Up: A Guide to Spirituality Without Religion in 2014 and Islam and the Future of Tolerance: A Dialogue in 2015. Harris is one of the "Four Horsemen of New Atheism," alongside Richard Dawkins, Daniel Dennett, and the late Christopher Hitchens. He advocates separation of church and state and scientific skepticism; he is also a critic of religion and a proponent of the liberty to criticize it. He has praised Advaita Vedanta and Dzogchen, however, as "they contain empirical insights about the nature of consciousness that do not depend upon faith." Harris' writings on religion have drawn both praise and condemnation. Some commentators have accused him of Islamophobia, believing he encourages the intolerance of Muslims; others have praised his criticism as unapologetically direct and long overdue. Harris and others have also argued in response that the term "Islamophobia" is misused and that such labeling is often an attempt to silence reasonable criticism. Harris has written articles for The Huffington Post, Los Angeles Times, The Washington Post, The New York Times, Newsweek, and the scientific journal Nature. His articles touch upon a diversity of topics including religion, morality, neuroscience, free will, terrorism, and self-defense. He regularly gives talks around the United States and Great Britain, including a speech at TED, where he outlined the arguments made in his book The Moral Landscape. Harris has also made numerous television appearances, including interviews for Nightline, Real Time with Bill Maher, The O'Reilly Factor, The Daily Show, The Colbert Report, and The Last Word, among others. He has also appeared in the documentary films The God Who Wasn't There (2005) and The Unbelievers (2013). 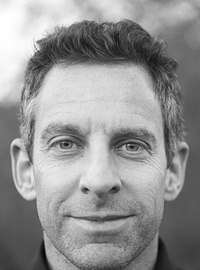 image credit
Sam Harris by Cmichel67, is licensed under cc-by-sa-4.0, resized from the original.