Salman Khan (pronunciation : [səlˈmaːn ˈxaːn]; born Abdul Rashid Salim Salman Khan on 27 December 1965) is an Indian actor, producer, television presenter, and philanthropist. He is the son of actor and screenwriter Salim Khan, Khan began his acting career with Biwi Ho To Aisi but it was his second film Maine Pyar Kiya in which he acted in a lead role that garnered him the Filmfare Award for Best Male Debut. Khan has starred in several commercially successful films, such as Saajan (1991), Hum Aapke Hain Koun. He has starred in more than 80 Hindi films and thus far has established himself as a leading actor of Hindi cinema. 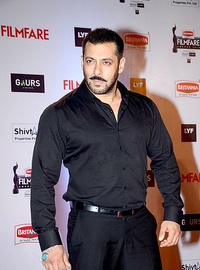 image credit
Salman Khan by http://www.bollywoodhungama.com, is licensed under cc-by-3.0, resized from the original.