Sally Cecilia Hawkins (born 27 April 1976) is an English actress. Her performance as Poppy in the 2008 Mike Leigh film Happy-Go-Lucky won her several international awards, including the Golden Globe Award and the Silver Bear for Best Actress at the Berlin Film Festival. Other notable roles have included Susan in Vera Drake (2004), Sarah in An Education (2009), Rita O'Grady in Made in Dagenham (2010), Sue Trinder in the BBC serial Fingersmith (2005), Anne Elliot in Persuasion (2007), and Ginger in the 2013 Woody Allen film Blue Jasmine, for which she received an Academy Award nomination for Best Supporting Actress. Hawkins had previously worked with Woody Allen in Cassandra's Dream (2007). 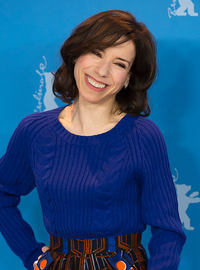 image credit
Sally Hawkins by Martin Kraft, is licensed under cc-by-sa-3.0, resized from the original.