Sachin Ramesh Tendulkar (/ˌsətʃɪn tɛnˈduːlkər/; born 24 April 1973) is a former Indian cricketer widely acknowledged as one of the greatest batsmen of all time, popularly holding the title "God of Cricket" among his fans. Some commentators, such as former West Indian batsman Brian Lara, have labelled Tendulkar the greatest cricketer of all time. He took up cricket at the age of eleven, made his Test debut against Pakistan at the age of sixteen, and went on to represent Mumbai domestically and India internationally for close to twenty-four years. Tendulkar played 664 international cricket matches in total, scoring 34,357 runs. 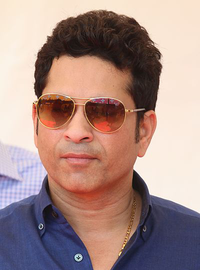