Ryan Steven Lochte (/ˈlɒkti/, LOCK-tee; born August 3, 1984) is an American competitive swimmer and an 11-time Olympic medalist (five gold, three silver, three bronze). His seven individual Olympic medals rank near the top in men's swimming. As part of the American team, he holds the world record in the 4×200-meter freestyle relay (long course). Individually, he currently holds the world record in the 100-meter individual medley, 200-meter individual medley (long and short course), and the 400-meter individual medley (short course).Lochte's success has earned him the World Swimmer of the Year Award and the American Swimmer of the Year Award twice. He has also been named the FINA Swimmer of the Year three times. He has won a total of 89 medals in major international competition, 53 gold, 22 silver, and 14 bronze spanning the Olympics, the World, Pan American, and Pan Pacific Championships.Lochte specializes in the backstroke and individual medley, but is also a freestyle and butterfly swimmer. He is noted for the speed and distance he attains while kicking underwater. Lochte is also known for his dominance in the short course format (25-yard and 25-meter long swimming pools). 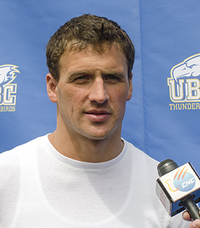 image credit
Ryan Lochte by Ubcwwong, is licensed under cc-by-sa-3.0, resized from the original.