Ryan James Howard (born November 19, 1979) is a Major League Baseball first baseman for the Philadelphia Phillies. Nicknamed The Big Piece, Howard stands 6 feet 4 inches (193 cm) and weighs 240 pounds (110 kg). He bats and throws left-handed. Howard was the 2006 National League MVP. Howard is the fastest player to reach both the 100 and 200 home run milestones in Major League Baseball history, passing the marks in 2007 and 2009, respectively.Due to Howard's reputation as an extreme pull hitter, opposing managers often utilize an unusual infield shift with him at the plate, with the third baseman playing shortstop, the shortstop playing second base, and the second baseman playing in shallow right field. 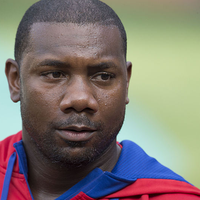 image credit
Ryan Howard by Keith Allison, is licensed under cc-by-sa-2.0, resized from the original.