Rutger Oelsen Hauer (Dutch pronunciation: [ˈrʏtxər ˈulsə(n) ˈɦɑuər]; born 23 January 1944) is a Dutch actor, writer, and environmentalist. His career began in 1969 with the title role in the popular Dutch television series Floris. His film credits include Flesh+Blood, Blind Fury, Blade Runner, The Hitcher, Escape from Sobibor (for which he won a Golden Globe Award for Best Supporting Actor), Nighthawks, Wedlock, Sin City, Confessions of a Dangerous Mind, Ladyhawke, Buffy the Vampire Slayer, The Osterman Weekend, The Blood of Heroes, Batman Begins, Hobo with a Shotgun, and The Rite. Hauer also founded an AIDS awareness organization, the Rutger Hauer Starfish Association. 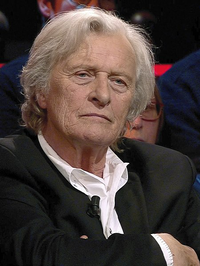 image credit
Rutger Hauer by DWDD, is licensed under cc-by-3.0, resized from the original.