Keith Rupert Murdoch, AC, KSG (born 11 March 1931) is an Australian American business magnate. Murdoch became managing director of Australia's News Limited, inherited from his father, in 1952. He is the founder, Chairman and CEO of global media holding company News Corporation, the world's second-largest media conglomerate, and its successors News Corp and 21st Century Fox after the conglomerate split on 28 June 2013. In 2014, Murdoch was inducted into the Television Hall of Fame for his contributions in the field of television. 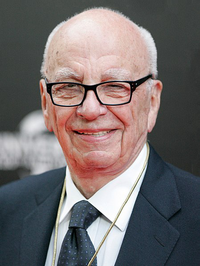 image credit
Rupert Murdoch by Eva Rinaldi, is licensed under cc-by-sa-2.0, resized from the original.