Rudolph William Louis "Rudy" Giuliani (/ˈruːdi ˌdʒuːliˈɑːni/; born May 28, 1944) is an American lawyer, businessman, former politician, and public speaker from New York. He served as Mayor of New York City from 1994 to 2001.A Democrat and Independent in the 1970s, and a Republican since the 1980s, Giuliani served in the United States Attorney's Office, for the Southern District of New York, eventually becoming U. Giuliani was considered a potential candidate for either Governor or Senator of New York in 2010, as well as the 2012 presidential election, but decided not to run and remain active in his business career. 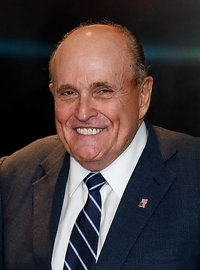 image credit
Rudy Giuliani by Palcio do Planalto, is licensed under cc-by-2.0, resized from the original.