Rose McIver (born Frances Rose McIver on 10 October 1988) is an actress from New Zealand. She is best known for her role as Summer Landsdown/Ranger Operator Series Yellow in 2009's Power Rangers: RPM. Her mainstream feature film debut came in 2009's The Lovely Bones; other works include the films Predicament, Light Years, and most recently, Blinder; as well as guest appearances in Xena, Hercules, and Legend of the Seeker. Currently, she can be seen on television on ABC's Once Upon a Time and Showtime's Masters of Sex. 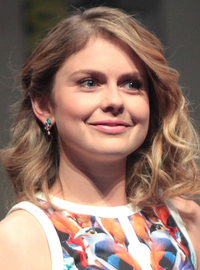 image credit
Rose McIver by Gage Skidmore, is licensed under cc-by-sa-2.0, resized from the original.