Rosamund Mary Elizabeth Pike (born 27 January 1979) is an English actress who first came to international attention when she played Bond girl Miranda Frost in Die Another Day (2002). Since then her films roles have included Jane Bennet in Pride and Prejudice (2005), Nikki Gardner in Fracture (2007), Alex in Fugitive Pieces (2007), Helen in An Education (2009), Miriam Grant-Panofsky in Barney's Version (2010), Lisa Hopkins in Made in Dagenham (2010), Kate Sumner in Johnny English Reborn (2011), Queen Andromeda in Wrath of the Titans (2012), Helen Rodin in Jack Reacher (2012) and Sam Chamberlain in The World's End (2013). 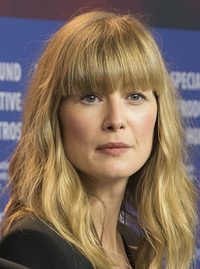 image credit
Rosamund Pike by Elena Ringo, is licensed under cc-by-sa-4.0, resized from the original.