Ronald William "Ron" Howard (born March 1, 1954) is an American film director, producer and actor.He came to prominence playing Opie Taylor in the sitcom The Andy Griffith Show for eight years, and later the teenaged Richie Cunningham in the sitcom Happy Days for six years. He appeared in the films The Music Man in 1962, American Graffiti in 1973, and The Shootist in 1976, the latter during his run on Happy Days. 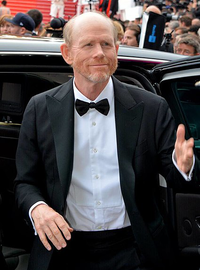 image credit
Ron Howard by Georges Biard, is licensed under cc-by-sa-4.0, resized from the original.