Roman Arkadyevich Abramovich (Russian: Рома́н Арка́дьевич Абрамо́вич, pronounced [rɐˈman ɐrˈkadʲjɪvʲɪt͡ɕ ɐbrɐˈmovʲɪt͡ɕ]; born 24 October 1966) is a Russian businessman and the main owner of the private investment company Millhouse LLC. He is known outside Russia as the owner of Chelsea Football Club, an English Premier League football team.Abramovich, with an estimated fortune of U.S.$14.6 billion, is currently the 5th richest person in Russia and the 50th richest person in the world, according to the 2012 Forbes list. According to Bloomberg, Abramovich's net worth in 2014, was $14.2 billion (April 2014). 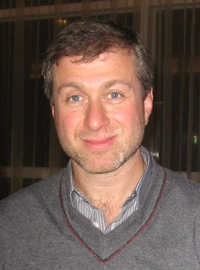 image credit
Roman Abramovich by Mark Freeman, is licensed under cc-by-2.0, resized from the original.