Roger Thomas Staubach (born February 5, 1942) is a former star National Football League quarterback who is executive chairman of Jones Lang LaSalle.He attended U.S. Naval Academy where he won college football's Heisman Trophy, and after graduation he served in the U.S. Navy, including a tour of duty in Vietnam.Staubach joined the Dallas Cowboys in 1969. He played with the club during five seasons in which they played in the Super Bowl, four as the primary starting quarterback. He led the Cowboys to victories in Super Bowl VI and Super Bowl XII. Staubach was named Most Valuable Player of Super Bowl VI, becoming the first of four players to win both the Heisman Trophy and Super Bowl MVP, along with Jim Plunkett, Marcus Allen and Desmond Howard. He was named to the Pro Bowl six times during his 11-year NFL career. 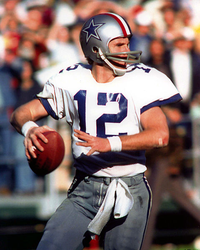