Robin Hugh Gibb, CBE (22 December 1949 – 20 May 2012) was a musician, singer, songwriter and producer, best known as a member of the Bee Gees, which was co-founded with his fraternal twin brother Maurice and older brother Barry. Their younger brother Andy was also a singer. He joined his first band the Rattlesnakes which was formed in Manchester, England. As an instrumentalist, he primarily played a variety of keyboards, such as piano, organ and Mellotron on Bee Gees albums Bee Gees' 1st (1967) and Odessa, he also played guitar on his debut solo album Robin's Reign (1970). 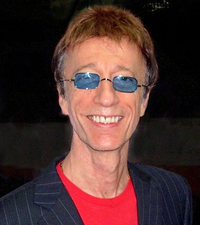