Roberta Jymme Schourop (born April 7, 1943, Monterey Park, California), better known as Roberta Shore, is an American actress and performer, most famous for her youthful television and movie roles in the 1950s and early 1960s. Though never a Mouseketeer, Shore co-starred in several Walt Disney productions featuring the Mouseketeers, and thus came to be associated with them. She appeared as Annette Funicello's rival Laura Rogan in Annette's self-titled series, and as French-speaking Franceska in The Shaggy Dog (1959). Aside from Disney, Shore had a featured role in the 1959 screen version of Blue Denim, duetting with Warren Berlinger, and an uncredited cameo appearance in A Summer Place, as Sandra Dee's gossipy schoolmate Anne Talbert. Later she played Ricky Summers in the 1960 movie Because They're Young, Jenny Bell in The Young Savages (1961), and had another uncredited role, as Lorna in Stanley Kubrick's 1962 version of Lolita. Shore's television credits include appearances on Playhouse 90, The Adventures of Ozzie and Harriet, The Donna Reed Show, The Lawrence Welk Show (a singing appearance in 1959), several Western series including Maverick, Wagon Train, The Tall Man, and Laramie, and regular roles on Father Knows Best (as Joyce, Bud Anderson's girl friend), The New Bob Cummings Show and The Virginian. In 1957, Shore played the role of popular literary detective Nancy Drew in a 1957 pilot, which was produced by Desilu for CBS. The project was not picked up due to disapproval from the owners of the franchise. She co-starred alongside actors Tim Considine and Frankie Thomas. Shore was featured very prominently as a series regular within the first three seasons of The Virginian as Betsy Garth, the daughter of Shiloh Ranch owner Judge Garth played by Lee J. Cobb. Though no longer a regular in the fourth season, she returned in the fourth episode of that season (#95 "The Awakening") in a story in which Betsy meets and falls for a gentleman played by Glenn Corbett. A disillusioned former minister, Corbett's character finds his way back to his belief in God and by story's end finally proposes to Betsy. The episode ends with the couple being wed at Shiloh Ranch by Judge Garth himself before the newlyweds ride off to Pennsylvania where Corbett's character is to become the minister of a church. After the mid-1960s, Shore did little in the way of movies or television. In 1962, she starred alongside Candy Moore in a failed television pilot Time Out for Ginger. She emerged in 1984 as a radio disc jockey and program host in Salt Lake City, Utah. Active in The Church of Jesus Christ of Latter-day Saints, Shore and then-husband Ron Frederickson auditioned for the parts of Ishmael and his wife Leah in a 2004 movie adaptation of the Book of Mormon. While her husband won the role of Ishmael, the producers felt Shore's earlier fame would detract from the movie's message, and chose actress Sheryl Lee Wilson to play Leah. As a child Roberta was cast as the Yodeler for "It's a Small World". 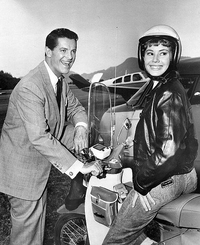