Robert John Wagner, Jr. (pronounced /ˈwæɡnər/; born February 10, 1930) is an American actor of stage, screen, and television, best known for starring in the television shows It Takes a Thief (1968–1970), Switch (1975–1978), and Hart to Hart (1979–1984). He also had a recurring role as Teddy Leopold on the TV sitcom Two and a Half Men and has a recurring role as Anthony DiNozzo Sr. on the police procedural NCIS.In movies, Wagner is known for his role as Number Two in the Austin Powers trilogy of films (1997, 1999, 2002), as well as for A Kiss Before Dying, The Pink Panther, Harper, The Towering Inferno and many more.Wagner's autobiography, Pieces of My Heart: A Life, written with author Scott Eyman, was published on September 23, 2008. 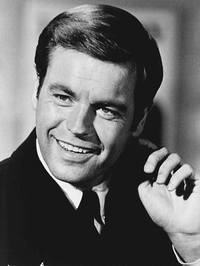