Robert Smalls (April 5, 1839 – February 23, 1915) was an enslaved African American who, during and after the American Civil War, gained freedom and became a ship's pilot, sea captain, and politician. He freed himself, his crew and their families from slavery on May 13, 1862, by commandeering a Confederate transport ship, CSS Planter, in Charleston harbor, and sailing it from Confederate-controlled waters to the U.S. blockade. His example and persuasion helped convince President Lincoln to accept African-American soldiers into the U.S. Army and the U.S. Navy. Smalls was born in Beaufort, South Carolina. After the American Civil War, he returned there and became a politician, winning election as a Republican to the South Carolina State legislature and the United States House of Representatives during the Reconstruction era. As a politician, Smalls authored state legislation providing for South Carolina to have the first free and compulsory public school system in the United States. He founded the Republican Party of South Carolina. Due to the state's white Democrats disfranchising most blacks (who made up much of the Republican Party), Smalls was the last Republican to represent South Carolina's 5th congressional district until 2010. 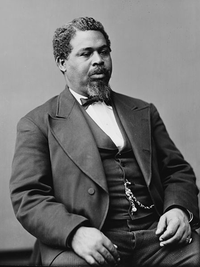