Robert Francis Kennedy (November 20, 1925 – June 6, 1968), commonly known as "Bobby" or by his initials RFK, was an American politician from Massachusetts. He served as a Senator for New York from 1965 until his assassination in 1968. He was previously the 64th U. Shortly after midnight on June 5, 1968, after Kennedy defeated Senator Eugene McCarthy in the California presidential primary, he was shot by Sirhan Sirhan, a 24-year old Palestinian, and died the following day. 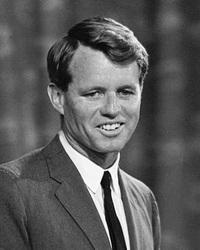