Robert Drysdale (born January 1, 1981, in Provo, Utah) is a Brazilian Jiu-Jitsu black belt and professional mixed martial artist currently signed with the UFC. Born in the United States to a Brazilian mother and American father, he moved to Brazil with his family in 1987 at the age of six.As a young man, he moved to Las Vegas, Nevada to begin college. While in the United States, following his growing interest in martial arts, he began training Brazilian Jiu-Jitsu with Lewis-Perderneiras in 1998 and carried out a submission victory over Marcelo Garcia in 2007. Drysdale also made a successful MMA debut defeating Bastien Huveneers via arm triangle choke. 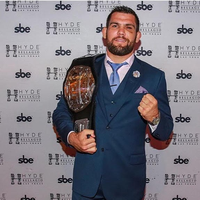 image credit
Robert Drysdale by Ozonexp3, is licensed under cc-by-sa-4.0, resized from the original.