Robert De Niro (/dəˈnɪroʊ/; born August 17, 1943) is an American actor, director, producer, and voice actor. His first major film roles were in Bang the Drum Slowly (1973) and Mean Streets (1973). In 1974, after not receiving the role of Michael Corleone in The Godfather, he was cast as the young Vito Corleone in The Godfather Part II, a role for which he won the Academy Award for Best Supporting Actor. De Niro has starred in over ninety films throughout his career. 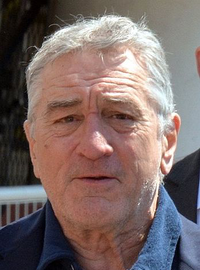 image credit
Robert De Niro by Georges Biard, is licensed under cc-by-sa-3.0, resized from the original.