Robert Bernard Altman (/ˈɔːltmən/; February 20, 1925 – November 20, 2006) was an American film director, screenwriter, and film producer. A five-time nominee of the Academy Award for Best Director and an enduring figure from the New Hollywood era, Altman was considered a "maverick" in making films with a highly naturalistic but stylized and satirical aesthetic, unlike most Hollywood films. He is consistently ranked as one of the greatest and most influential filmmakers in history. His style of filmmaking was unique among directors, in that his subjects covered most genres, but with a "subversive" twist that typically relies on satire and humor to express his personal vision. Altman developed a reputation for being "anti-Hollywood" and non-conformist in both his themes and directing style. However, actors especially enjoyed working under his direction because he encouraged them to improvise, thereby inspiring their own creativity. He preferred large ensemble casts for his films, and developed a multitrack recording technique which produced overlapping dialogue from multiple actors. This produced a more natural, more dynamic, and more complex experience for the viewer. He also used highly mobile camera work and zoom lenses to enhance the activity taking place on the screen. Critic Pauline Kael, writing about his directing style, said that Altman could "make film fireworks out of next to nothing." In 2006, the Academy of Motion Picture Arts and Sciences recognized Altman's body of work with an Academy Honorary Award. He never won a competitive Oscar despite five nominations. His films MASH (1970), McCabe & Mrs. Miller (1971), and Nashville (1975) have been selected for preservation in the United States National Film Registry. Altman is one of the few filmmakers whose films have won the Golden Bear at Berlin, the Golden Lion at Venice, and the Golden Palm at Cannes. 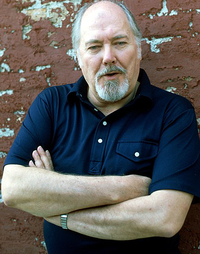 image credit
Robert Altman by Gorupdebesanez, is licensed under cc-by-sa-3.0, resized from the original.