River Jude Phoenix (August 23, 1970 – October 31, 1993) was an American actor, musician and activist. He was the older brother of Rain Phoenix, Joaquin Phoenix, Summer Phoenix and Liberty Phoenix. Phoenix's work encompassed 24 films and television appearances, including the science fiction adventure film Explorers, the coming-of-age film Stand by Me, the action sequel Indiana Jones and the Last Crusade and the independent adult drama My Own Private Idaho. At the time of his death, Phoenix had been in the middle of filming Dark Blood (1993). 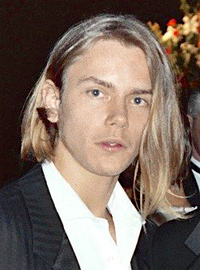 image credit
River Phoenix by Alan Light, is licensed under cc-by-2.0, resized from the original.