Richard Preston Butler Jr. (born December 3, 1982), better known by his stage name Rico Love, is an American singer, songwriter, actor, and record producer. He was born in New Orleans, Louisiana, but split his childhood between Milwaukee, Wisconsin and New York City's Harlem neighborhood. He attended Florida A&M and, while visiting Atlanta, Georgia, worked his way into the music industry through connections with Usher, who would become one of Love's frequent collaborators. The first song Love ever wrote in his career was "Throwback" for which ended up on Usher's 2004 album Confessions. Love success continued writing and producing hit records such as Usher's "There Goes My Baby" and "Hey Daddy (Daddy's Home)", Nelly's "Just a Dream" and "Gone", as well as Beyoncé Knowles' "Sweet Dreams". and has contributed to works which have gone on to win Grammys such as Beyoncé's 2009 Best Contemporary R&B album I Am... Sasha Fierce, Usher's 2010 Best Contemporary R&B album Raymond v. Raymond, and Usher's 2010 Best Male R&B Vocal Performance "There Goes My Baby". In addition Love has written and produced records for Kelly Rowland, Diddy – Dirty Money, Chris Brown, Alexandra Burke, Keri Hilson, Fergie, and Fantasia. As a solo recording artist, he released two studio albums TTLO (2015) and Even Kings Die (2018). Love is also the CEO of Division1, a record label which partnered with Interscope Records in 2013. Love has appeared as a featured artist on records with T.I., Usher, Jermaine Dupri, Jamie Foxx, Rich Boy, and Fat Joe. 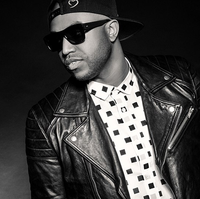 image credit
Rico Love by MadeYouFamous, is licensed under cc-by-sa-3.0, resized from the original.