Ricky Dene Gervais (/dʒərˈveɪz/; born 25 June 1961) is an English comedian, actor, voice actor, director, producer, musician, writer, and former radio presenter.Gervais achieved mainstream fame with his television series The Office and the subsequent series Extras, both of which he co-wrote and co-directed with Stephen Merchant. In addition to writing and directing the shows, Gervais played the lead roles of David Brent in The Office and Andy Millman in Extras. In 2010 he was named on the TIME 100 list of the world's most influential people. 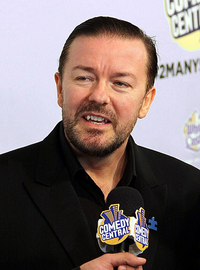