Donald Richard "Richie" Ashburn (March 19, 1927 – September 9, 1997), also known by the nicknames, "Putt-Putt", "The Tilden Flash", and "Whitey" due to his light-blond hair, was an American center fielder in Major League Baseball. He was born in Tilden, Nebraska (some sources give his full middle name as "Richie"). From his youth on a farm, he grew up to become a professional outfielder and veteran broadcaster for the Philadelphia Phillies and one of the most beloved sports figures in Philadelphia history. He was inducted into the National Baseball Hall of Fame in 1995. 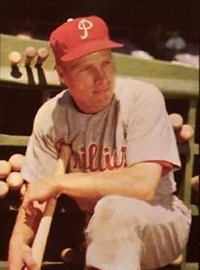