Richard Crispin Armitage (born 22 August 1971) is an English film, television, theatre and voice actor. He is best known internationally for his role as Thorin Oakenshield in Peter Jackson's film trilogy adaptation of The Hobbit. However Armitage first gained fame in Britain for his portrayal of John Thornton in the British television programme North & South (2004). He is also known for his roles as John Standring in the TV movie Sparkhouse, Guy of Gisborne in the TV drama Robin Hood, Harry Kennedy in the TV comedy The Vicar of Dibley, Lucas North in the TV drama Spooks and John Porter in the TV drama Strike Back.After graduating from the London Academy of Music and Dramatic Art (LAMDA), Armitage initially sought theatre work and was a member of the Royal Shakespeare Company (RSC). But he turned to film and television roles when he noticed that leading stage roles went to actors with name recognition who could bring in patrons to fill theatres. After twelve years away and having earned that name recognition, Armitage returned to the stage in 2014 playing John Proctor in the highly successful and critically acclaimed production of The Crucible at The Old Vic.One of Armitage's trademarks is his baritone voice, which he has employed as a voice actor since 2006. While working on the TV show Robin Hood, he was asked to record audiobooks for the first season of that series. Since then, Armitage has recorded many notable audiobooks as well as worked as a narrator on many TV and radio shows and adverts. His flair for speaking in a multitude of dialects, accents and voices has garnered Armitage numerous accolades for his narration skills, including the 2014 Best Audiobook of the Year Award from Audible.com for his recording of Hamlet, Prince of Denmark: A Novel. 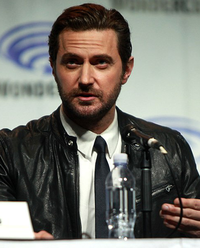 image credit
Richard Armitage (actor) by Gage Skidmore, is licensed under cc-by-sa-2.0, resized from the original.