Ralph Nader (/ˈneɪdər/, Arabic: رالف نادر; born February 27, 1934) is an American political activist, as well as an author, lecturer, and attorney. Areas of particular concern to Nader include consumer protection, humanitarianism, environmentalism, and democratic government.Nader came to prominence in 1965 with the publication of his book Unsafe at Any Speed, a critique of the safety record of American automobile manufacturers in general, and most famously the Chevrolet Corvair. In 1999, a New York University panel of journalists ranked Unsafe at Any Speed 38th among the top 100 pieces of journalism of the 20th century.Nader is a five-time candidate for President of the United States, having run as a write-in candidate in the 1992 New Hampshire Democratic primary, as the Green Party nominee in 1996 and 2000, and as an independent candidate in 2004 and 2008. 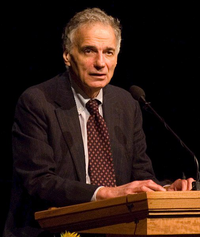 image credit
Ralph Nader by https://www.flickr.com/photos/wickenden/, is licensed under cc-by-sa-2.0, resized from the original.