Rafael "Rafa" Nadal Parera (Catalan: [rəfəˈɛɫ nəˈðaɫ pəˈɾeɾə], Spanish: [rafaˈel naˈðal paˈɾeɾa]; born 3 June 1986) is a Spanish professional tennis player and the current world No. 1. His success on clay has earned him the nickname "King of Clay" and has led many sports journalists and commentators, as well as former and current players, to regard him as the greatest clay court player in history. By winning the 2013 French Open, Nadal became the only male player to win a single Grand Slam tournament eight times and the first to win at least one Grand Slam tournament for nine consecutive years, breaking the record of eight consecutive years previously shared by Björn Borg, Pete Sampras, and Roger Federer. 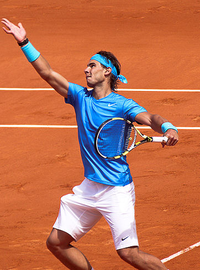 image credit
Rafael Nadal by Rafael_Nadal_2011_Roland_Garros_2011.jpg, is licensed under cc-by-sa-2.0, resized from the original.