Rachel Zoe Rosenzweig (born September 1, 1971) better known as Rachel Zoe, is an American fashion designer, businesswoman, and writer. She is best known for working with celebrities, fashion houses, beauty firms, advertising agencies, and magazine editors. Zoe has been involved in the fashion industry for nearly two decades and has since become a renowned stylist and designer[citation needed]. She is known for her extensive influence in the fashion world and for her A-list clients. In 2008, the first season of her Bravo reality television series The Rachel Zoe Project debuted. She is married to Rodger Berman, President of Rachel Zoe, Inc. The couple has two sons. 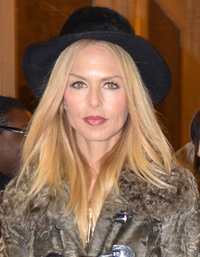 image credit
Rachel Zoe by Rachel_Zoe_and_Rodger_Berman_After_Oscar_de_la_Renta.jpg, is licensed under cc-by-2.0, resized from the original.