Rachel Lauren Stevens (born 9 April 1978) is an English singer-songwriter, actress, television presenter, model and businesswoman. She was a member of the pop group S Club between 1999 and 2003. She released her solo debut studio album Funky Dory in September 2003. The album reached number nine on the UK album chart and the British Phonographic Industry (BPI) awarded it with a gold certification in October 2003. Two singles, "Sweet Dreams My LA Ex" and "Funky Dory", were initially released from the album: "Sweet Dreams My LA Ex" peaked at number two in the UK and received a silver certification from the BPI. In July 2004, Stevens released the single "Some Girls" as a charity record for Sport Relief, and the single's success prompted Polydor to re-issue Funky Dory with three new songs. Come and Get It, her second studio album, was released in October 2005. It peaked at #28 in the UK, and two of its three singles reached the Top 10. In 2008, she came second in the sixth series of the BBC One series Strictly Come Dancing with her dance partner Vincent Simone. On 16 November 2010, she gave birth to her first child, Amelie. In 2013, she was a mentor assistant on The X Factor New Zealand. In September 2013, Stevens announced she was pregnant with her second child and gave birth to Minnie on 1 April. Also in 2014, she was awarded FHM's sexiest woman of all time. Despite not being Irish, Stevens became one of the coaches in the 4th season of RTE's The Voice of Ireland. Stevens' version of the song "More, More, More" is used in the ScS Sofas adverts. In November 2014, S Club 7 announced plans for an arena reunion tour, promptly entitled Bring It All Back 2015, touring the UK in May 2015. 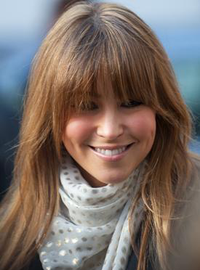 image credit
Rachel Stevens by Rachel_Stevens_in_Feb_2010.jpg, is licensed under cc-by-2.0, resized from the original.