Rachel Platten(born May 20, 1981) is an American pop singer-songwriter best known for her single "1,000 Ships", a top 30 hit on the Billboard Adult Top 40 chart. Platten grew up in Newton Centre, Massachusetts. Her second album, Be Here, was released from Rock Ridge Music in 2011.An earlier song, "Seven Weeks", was used for the film The Good Guy. Her song "Work of Art" was also used as the intro to the television series, Jane by Design which was canceled after one season. Her song 'Begin Again' was used in the 100th episode of the hit ABC Family TV show Pretty Little Liars, titled "Miss Me x100".Platten graduated from Trinity College with a degree in international relations in 2003.Her song "Fight Song" was used in the Christmas episode of Pretty Little Liars' fifth season. 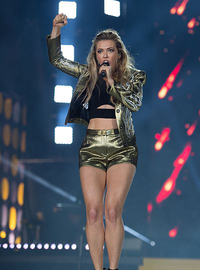