Priti Sushil Patel (born 29 March 1972) is a British politician serving as Home Secretary since 2019. She previously served as Secretary of State for International Development from 2016 to 2017. A member of the Conservative Party, she has been Member of Parliament (MP) for Witham since 2010. She is ideologically on the right wing of the Conservative Party and considers herself to be a Thatcherite. Patel was born in London to a Ugandan-Indian family. She was educated at Keele University and the University of Essex. Inspired to get involved in politics by the Conservative Prime Minister Margaret Thatcher, she was involved with the Referendum Party before switching allegiance to the Conservatives. She worked for the public-relations consultancy firm Weber Shandwick for several years before seeking a political career. After unsuccessfully contesting Nottingham North at the 2005 general election, the new Conservative leader David Cameron recommended Patel for the party's "A-List" of prospective parliamentary candidates. She was elected MP for Witham, a new seat in Essex, at the 2010 general election, before being re-elected in 2015, 2017 and 2019. Under Cameron's government, Patel was appointed Minister of State for Employment and was vice-chair of the Conservative Friends of Israel. She attracted attention for her socially conservative stances. A longstanding Eurosceptic, Patel was a leading figure in the Vote Leave campaign for Brexit during the 2016 referendum on UK membership of the European Union. Following Cameron's resignation, Patel supported Theresa May's bid to become Conservative leader; May subsequently appointed Patel Secretary of State for International Development. In 2017, Patel was involved in a political scandal involving unauthorised meetings with the Government of Israel which breached the Ministerial Code, ending her tenure as International Development Secretary. Under Boris Johnson's premiership, she became Home Secretary in July 2019. 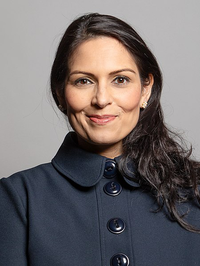 image credit
Priti Patel by Richard Townshend, is licensed under cc-by-3.0, resized from the original.