Princess Eugenie of York (/ˈjuːʒəni/ Eugenie Victoria Helena; born 23 March 1990) is the second child and younger daughter of Prince Andrew, Duke of York, and Sarah, Duchess of York. As such she is seventh, and the second female, in the line of succession to the thrones of the 16 Commonwealth realms. Eugenie works as a benefit auctions manager.Her first royal engagement was opening Teenage Cancer Trust's unit for young cancer patients in Leeds on 23 October 2008. She also makes appearances with the royal family at events, such as when she and her sister, Princess Beatrice, represented their father at a service of thanksgiving for her aunt, Diana, Princess of Wales, in 2007. 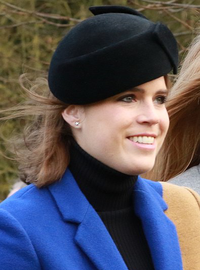 image credit
Princess Eugenie of York by Mark Jones, is licensed under cc-by-2.0, resized from the original.