Prince Andrew, Duke of York KG GCVO ADC(P) (Andrew Albert Christian Edward; born 19 February 1960), is a British prince, the second son and third child of Queen Elizabeth II and Prince Philip, Duke of Edinburgh. At the time of his birth, he was second in the line of succession to succeed his mother; he is currently fifth in line.He also holds the actual rank of commander and the honorary rank of rear admiral in the Royal Navy, in which he served as an active duty helicopter pilot and later instructor in helicopter flight. 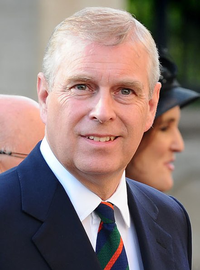 image credit
Prince Andrew, Duke of York by Northern Ireland Office, is licensed under cc-by-2.0, resized from the original.