Lontrell Dennell Williams, Jr. (born November 8, 1999), better known by his stage name Pooh Shiesty, is an American rapper from Memphis, Tennessee. He is signed to Gucci Mane's 1017 Records and Atlantic Records. He rose to fame in 2020 from his collaborations with the rapper and other artists within the label. He is perhaps best known for his 2020 single, "Back in Blood" featuring rapper Lil Durk. Pooh Shiesty released his debut commercial mixtape, Shiesty Season, on February 5, 2021, which peaked at number 3 on the US Billboard 200. His stage name was given by his late brother, and it comes from his childhood nickname "Mr. Pooh", and the name "Shiesty", referring to his lifestyle. He received a co-sign from fellow Memphis rapper Juicy J. 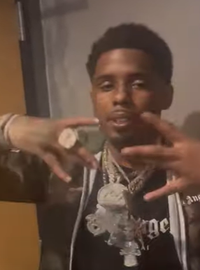