Alecia Beth Moore Hart (born September 8, 1979), better known by her stage name Pink (stylized as P!nk), is an American singer-songwriter, actress and model. Originally a member of the girl group Choice, she began her solo career with the 2000 single "There You Go", which was also included on her debut album, Can't Take Me Home, released later that year. The R&B album went on to be certified double-platinum in the United States. In 2009, Billboard magazine named Pink the #1 pop musician of the decade, in 2012 VH1 named Pink #10 on their list of the 100 Greatest Women in Music, and in 2013 Billboard named Moore the Woman of the Year. 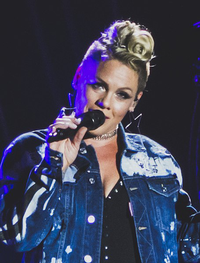 image credit
Pink (singer) by Raph_PH, is licensed under cc-by-2.0, resized from the original.