Pierre-Louis Padang Coffin (born 16 March 1967) is a French animator, film director, and voice actor. He is best known for co-directing, with Chris Renaud, the films of the Despicable Me franchise, and as the voice of the Minions, which won him the Kids Family Award at the 10th Seiyu Awards. 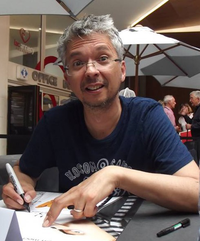 image credit
Pierre Coffin by Boungawa, is licensed under cc-by-sa-4.0, resized from the original.