Philipp Lahm (German pronunciation: [ˈfɪlɪp ˈlaːm]; born 11 November 1983) is a German footballer who plays as a full back or defensive midfielder for Bayern Munich and the German national team, both of which he captains.Lahm is considered one of the best full backs in the history of football, and was included in the World Cup team of the tournament in 2006 and 2010, the UEFA Team of the Tournament in 2008 and 2012 and in the UEFA Team of the Year 2006, 2008, 2012 and 2013. Although Lahm is right-footed, he is able to play on both sides of the pitch. He often cuts from the flank to the inside of the pitch to either shoot or pass. He is renowned for his pace, dribbling and precise tackling abilities as well as his small stature, giving him the nickname the "Magic Dwarf". 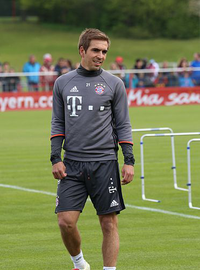 image credit
Philipp Lahm by Rufus46, is licensed under cc-by-sa-3.0, resized from the original.