Philip David Charles "Phil" Collins, LVO (born 30 January 1951) is an English musician, singer-songwriter, multi-instrumentalist, actor and writer, best known both as drummer and vocalist for rock group Genesis and as a solo artist. He sang the lead vocals on dozens of hit albums and singles in the UK and the US between 1976 and 2010, either as a solo artist or with Genesis. His solo singles, sometimes dealing with lost love and often featuring his distinctive gated reverb drum sound, ranged from the atmospheric "In the Air Tonight", dance-rock of "Sussudio", piano-driven power ballad "Against All Odds", to the political and religious connotations of "Another Day in Paradise". In 2014, Collins revealed that he was collaborating on new material with Adele. 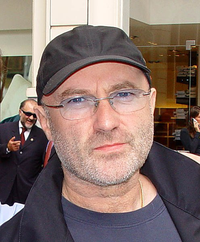 image credit
Phil Collins by Dicknroll, is licensed under cc-by-sa-3.0, resized from the original.