Peter S. Brown (born September 19, 1986), better known by the stage name Peter Vack, is an American actor, writer, director and producer. He is known for portraying Jason Strider in the MTV comedy series I Just Want My Pants Back (2011–2012), and Alex Merriweather in the Amazon Video comedy-drama series Mozart in the Jungle (2014–2015). Vack also voiced antagonist Gary Smith in the Rockstar Games video game Bully. 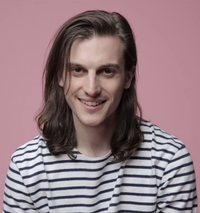 image credit
Peter Vack by Un-Titled Project Magazine, is licensed under cc-by-sa-3.0, resized from the original.