Peter Sellers, CBE (born Richard Henry Sellers; 8 September 1925 – 24 July 1980), was a British film actor, comedian and singer. He performed in the BBC Radio comedy series The Goon Show, featured on a number of hit comic songs and became known to a world-wide audience through his many film characterisations, among them Chief Inspector Clouseau in The Pink Panther series of films.Born in Portsmouth, Sellers made his stage debut at the Kings Theatre, Southsea, when he was two weeks old. English filmmakers the Boulting brothers described Sellers as "the greatest comic genius this country has produced since Charles Chaplin. 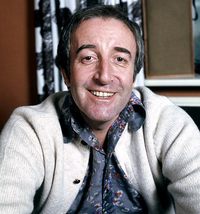 image credit
Peter Sellers by Allan Warren, is licensed under cc-by-sa-3.0, resized from the original.