Paulo Bruno Exequiel Dybala (Spanish pronunciation: [ˈpaulo ðiˈβala]; born 15 November 1993) is an Argentine professional footballer who plays as a forward for Italian club Juventus and the Argentina national team. After beginning his career in Argentina with Instituto de Córdoba, in 2011, he moved to Italian club Palermo in 2012; his performances in Serie A later earned him a transfer to Juventus in 2015, where he won the league title, the Coppa Italia and the Supercoppa Italiana during his first season with the club. Due to his creative style of play, pace, talent, technique, and eye for goal, he has been nicknamed La Joya (The Jewel, in Spanish). 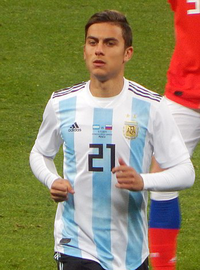 image credit
Paulo Dybala by Oleg Bkhambri (Voltmetro), is licensed under cc-by-sa-4.0, resized from the original.