Paul Verhoeven (Dutch: [ˈpʌu̯l vərˈɦuvə(n)]; born 18 July 1938) is a Dutch film director, screenwriter, and producer who has made movies in the Netherlands and the United States.Explicit violent and/or sexual content and social satire are trademarks of both his drama and science fiction films. He is best known in the U.S. for directing the science fiction films RoboCop (1987), Total Recall (1990), and Starship Troopers (1997), and the erotic thriller Basic Instinct (1992).Verhoeven's film Turkish Delight (1973) received the award for Best Dutch Film of the Century at the Netherlands Film Festival. His films altogether received a total of nine Academy Award nominations, mainly for editing and effects. Verhoeven won the Saturn Award for Best Director for Robocop. His Dutch war film Black Book (2006) was nominated for a BAFTA Award for Best Film Not in the English Language, and was voted the best Dutch film ever by the Dutch public in 2008.In contrast, he won the Golden Raspberry Awards for Worst Picture and Worst Director for Showgirls (1995); he is one of the few people to have accepted their award(s) in person.The Seattle Times praised Verhoeven by saying, "Director Paul Verhoeven often appears to be a one-man Dutch movie industry," while The San Diego Union called Verhoeven "a busy bee whose movies pollinate the festival circuit." 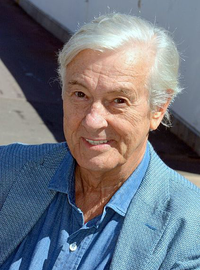 image credit
Paul Verhoeven by Georges Biard, is licensed under cc-by-sa-3.0, resized from the original.