Paul Frederic Simon (born October 13, 1941) is an American musician and singer-songwriter. Simon's fame, influence, and commercial success began as part of the duo Simon & Garfunkel, formed in 1964 with musical partner Art Garfunkel. Simon wrote nearly all of the pair's songs, including three that reached No. In 1986, Simon was awarded an Honorary Doctor of Music degree from Berklee College of Music, where he currently serves on the Board of Trustees. 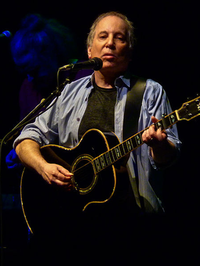 image credit
Paul Simon by Matthew Straubmuller (imatty35), is licensed under cc-by-2.0, resized from the original.