For other meanings, see Reubens (disambiguation).Paul Reubens (born Paul Rubenfeld; August 27, 1952) is an American actor, writer, film producer, game show host, and comedian, best known for his character Pee-wee Herman. Reubens joined the Los Angeles troupe The Groundlings in the 1970s and started his career as an improvisational comedian and stage actor. In 2010, he starred on Broadway in The Pee-wee Herman Show. 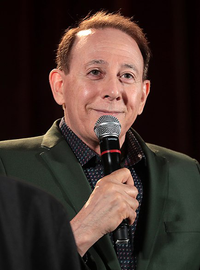 image credit
Paul Reubens by Gage Skidmore, is licensed under cc-by-sa-3.0, resized from the original.