Sir James Paul McCartney, MBE (born 18 June 1942) is an English musician, singer, songwriter, multi-instrumentalist, and composer. With John Lennon, George Harrison and Ringo Starr, he gained worldwide fame as a member of the Beatles, widely regarded as one of the most popular and influential acts in the history of rock music; his songwriting partnership with Lennon is one of the most celebrated of the 20th century. After the band's break-up, he pursued a solo career and later formed Wings with his first wife, Linda, and Denny Laine. He has married three times and is the parent of five children. 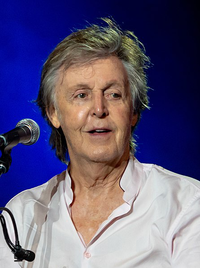 image credit
Paul McCartney by Raph_PH, is licensed under cc-by-2.0, resized from the original.