Clara Ann Fowler (November 8, 1927 – January 1, 2013), known by her professional name Patti Page, was an American singer and one of the best-known female artists in traditional pop music. She was the top-charting female vocalist, as well as the best-selling female artist of the 1950s, and sold over 100 million records. She was often introduced as "the Singin' Rage, Miss Patti Page". She was posthumously honored with the Lifetime Achievement Grammy Award in 2013. 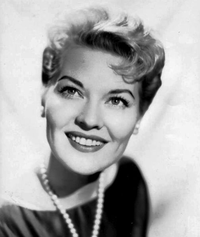