Charles Eugene "Pat" Boone (born June 1, 1934) is an American singer, actor, and writer. He was a successful pop singer in the United States during the 1950s and early 1960s. He sold over 45 million albums, had 38 Top 40 hits and appeared in more than 12 Hollywood movies. He continues to perform, and speak as a motivational speaker, a television personality, and a conservative political commentator. 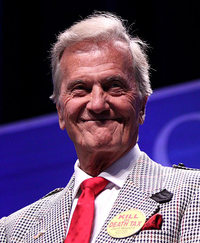 image credit
Pat Boone by Gage Skidmore, is licensed under cc-by-sa-3.0, resized from the original.